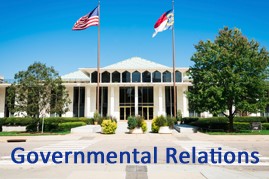 So far, both legislative leaders have spoken about agreements being reached on large money items. According to a news source, Senate leader Phil Berger said, “I think we will know hopefully by the end of this month whether or not we’re going to be able to have a traditional budget passed by the General Assembly and either signed by the governor or veto overridden.” Additionally, he stated that by the end of 2021 there will either be a budget enacted or the legislature will be in “mini budget territory.”

Education-Related Bills with Action This Week

HB 324: Ensuring Dignity & Nondiscrimination/Schools continues to sit on the governor’s desk, pending either a signature, veto, or three more days of inaction by the governor for it to automatically become law. The controversial bill is not expected to be signed by Governor Cooper. Click here to access last week’s Legislative Update with NCSBA’s summary of the bill. Click here for an official bill summary.

HB 91: Accountability and Fair Play in Athletics passed the Senate 28-14 on third (final) reading, was sent back to the House for concurrence, and is now awaiting a hearing in the House Education K-12 Committee. The bill requires the State Board of Education (SBE) to either enter into a memorandum of understanding with a nonprofit to administer high school interscholastic athletics (which could be the NC High School Athletic Association (NCHSAA) but is not required to be) or assign administration to DPI. Authors of the revised bill (Senators Vickie Sawyer, R-Iredell; Todd Johnson, R-Union; and Tom McInnis, R-Richmond) say that HB 91 is a result of an ongoing investigation into the NCHSAA over the past 22 months concerning lack of transparency. HB 91 is unanimously supported by Senate Republicans and opposed by the NCHSAA and a majority of Democratic Senators, with one out of 22 voting to approve the bill on third reading. Click here for an official bill summary.

HB 3: Craven Bd of Ed/Partisan Electoral Districts (primary sponsor: Representative Keith Kidwell, R-Beaufort) was ratified into SL 2021-140. This bill changes the method of election for the Craven County Board of Education from nonpartisan to partisan and requires Board members to be elected from districts. Click here for an official bill summary.

Education-Related Bill with Action Next Week

SB 593: Special Education Due Process Hearings (primary sponsors: Senators Brent Jackson, R-Sampson; Deanna Ballard, R-Watauga; Michael Lee, R-New Hanover) is scheduled to be heard in the House Judiciary 2 Committee on Wednesday, September 15, at 12:00 pm (click here for live stream). This bill alters the appeals process for special education due process hearings by eliminating State Hearing Review Officers (SHROs). SHROs currently review, upon the request of a party, the decisions made by administrative law judges. Under SB 593, the step involving SHROs would be eliminated, and any appeals would occur in state or federal court. School attorneys believe that this bill could potentially violate federal regulations, which could put federal funds in jeopardy. SB 593 passed the Senate in May on a 33-16 vote, and the bill’s contents were included in the Senate’s version of the budget. NCSBA is working to improve this bill. Click here for an official bill summary.

The number of school districts with mask mandates continues to increase, with currently 112 out of 115 requiring masks. As your school district finalizes its mask policy, please email information to Richard Bostic at rbostic@ncsba.org, as well as any corrections to the chart. 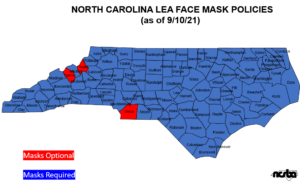 During a Leandro hearing on Wednesday, Superior Court Judge David Lee said that if the General Assembly and the governor do not fully fund the Leandro Comprehensive Remedial Plan by mid-October, he will take direct action. The Plan was submitted by the State Board of Education (SBE) and DPI earlier this year, followed by a June 2021 court order calling for implementation of the Plan. The hearing on Wednesday was the first progress report on the Plan, and another hearing will be held on October 18. According to a news source, if the mid-October deadline is not met, Judge Lee will explore his judicial powers to enforce the Plan’s implementation.

Legislative leaders continue to criticize the enforcement of the Plan because of the constitutional separation of powers and the lack of consultation with the legislature before approving the Plan. This week’s hearing comes after the release of each chamber’s budget proposal. According to a news source, the Senate budget proposal includes about 28% of the funding needed to implement the Plan in the 2021-2022 fiscal year, and the House budget proposal includes about 20%. Additionally, the State’s progress report says that the governor’s proposed budget covers the Plan’s implementation costs for the second and third year.

On Tuesday, DHHS released a report that shows 125 ongoing COVID-19 clusters in K-12 school settings. This is up from the 72 clusters reported last Tuesday, August 31. In a K-12 school setting, a cluster is defined as “a minimum of five positive cases identified through a positive molecular (PCR) or positive antigen test result with illness onsets or initial positive results within a 14-day period and plausible epidemiologic linkage between cases.” Click here for an article on the report.